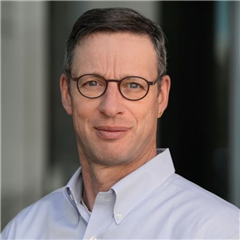 Matt Babler is one of the dads of Justin Babler-Kuebler, Drew Class of 2025. He spends his daytime serving as the President and CEO of Alumis Therapeutics, a Biotechnology Company focused on precision therapies for patients with autoimmune diseases.

Prior to joining Alumis, he served as President and Chief Executive Officer of Principia Biopharma, until its acquisition by Sanofi S.A. in October 2020. Matt previously was President and Chief Executive Officer of Talima Therapeutics from 2007 to 2011. From 1998 to 2007, he held several positions at Genentech, Inc., most notably as Vice President, Immunology Sales and Marketing. While at Genentech, he also helped to build and led the Commercial Development organization and the Cardiovascular Marketing organization. Matt started his career at Eli Lilly and Company in positions focused on sales, sales management, global marketing, and business development.

He is presently a Trustee of Live Oak School in San Francisco and a member of the finance committee. Matt also serves on the Board of Directors of Neoleukin Therapeutics, Inc., Prelude Therapeutics Inc., Omega Alpha SPAC, Sardona Therapeutics Inc. and on the Emerging Companies Section Governing and Health Section Boards of the Biotechnology Innovation Organization, where he is a founding member of its DEI committee.

Matt received a Swiss Federal Diploma in Pharmacy from the Federal Institute of Technology in Zurich and completed the Executive Development Program at the Kellogg Graduate School of Management at Northwestern University.

In his spare time Matt is spending as much time as his kids still allow him to spend with them, tending to his olive orchard and enjoying skiing and sailing.
Back